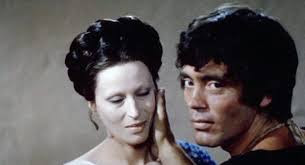 The oracle proclaims that Oedipus, a heir apparent, will murder his father and marry his mother. Hearing this cataclysmic prophecy, Oedipus flees to distance himself from those who he believes are his parents.

Unlike Euripedes Medea, who is the deliberate architect and agent of a barbaric revenge on her deserting lover, Oedipus, for all his qualities, is a helpless pawn of destiny, caught in the vice like jaws of a deus ex machina, borne towards destruction. Here indeed we are in a universe in which human beings are to the gods as "flies to wanton boys" who kill them for sport.

Pasolini gives us an unusual treatment of the play, which opens and closes in the modern era, but transports us to ancient times for the bulk of the film. His treatment has an anthropological flavor, using the costumes, chants and mud dwellings of different peoples with complete artistic liberty to evoke a harsh and terrifying ancient era, with great poetical force more than historical veracity. The film uses the director's favorite barren desert landscapes, with undulating dunes and scorched mud or brick buildings, which seem to grow out of the ground. This is an apt stage to act out dramas of torment or exaltation. It seems as if the camera and the desert is the main protagonist of his intensely spiritual cinema.

Pasolini is a director who feels comfortable tackling large themes. He is an artist of compassion and humanism. He has been called a Catholic communist, an unbeliever who yearned for faith. His vision is integrated and holistic, unlike the fragmented analytic introspection which is the hallmark of many current film makers like Charlie Kaufmann.
Posted by S. M. Rana at 12:02 AM