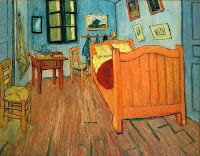 Kenneth Branaugh's 1995 version of Hamlet is filmed in the mansion where Winston Churchill grew up. As Hamlet climbs down a staircase in animated dialogue with his friend Horatio there is a glimpse of rows of shelves with books worn with age and use. It is a library room of Victorian aristocracy. It is about culture, hereditary wealth, the places and ambience which nurtured the minds of those who ran an empire. It is a place of meditation and conference, a nursery of ruler's, a war camp, a generals' den.

Behind the serene and dignified luxury of the place is the base of a pyramid of labour, retinues of valets, butlers, cooks, serfs. The columns of bound withered books brings a momentary feeling of envy tinged nostalgia for a place and time and a way of life.

Just a step away is Scarlet O'Hara's world of nineteenth century slavedom and American aristocracy.

"The Room" is one of the last of Van Gogh's paintings, a place of minimalism, orderly disorder, a hermit's cell where the light pours in suffusion. Le Carbusier, the French architect defines a house as a machine for living in. He designed a whole city, Chandigarh in North India, a statueless city keeping "life" and "man" at the centre. The "Room" is populated with a few clothes, medicine bottles, a bed, two chairs and a table and no book. Who says a room without books is a body without a soul? This is indeed a machine that suits the man who dwells in it. The room is empty and the heart is overflowing.

I once visited Agha Khan Palace in Pune, the palace turned to prison for Gandhi's incarceration during the Quit India Movement in '42. Gandhi's place of repose shows his five or six posessions: sandals, spectacles, the Geeta and maybe a few others but the impression that lingers is the focussing of a life on a single agenda, shedding superfluities down to the bone, a match to Van Gogh in sparsity. Gandhi's mind field spans a subcontinent and more with bloody battles in progress just a shout away. What Churchill and the likes attained by a retinue of servants, Gandhi achieved by filtering the non essential. I experienced as a heady shock the enormous power and influence the guy in the loin cloth wielded over the hundred millions .

In this time of toomuchness our lives and minds are being atomised, because we lack what Othello enigmatically calls " the cause, the cause " . We are people without names--agglomerations of a myriad things that do not form a whole, jig saw puzzles that do not join.