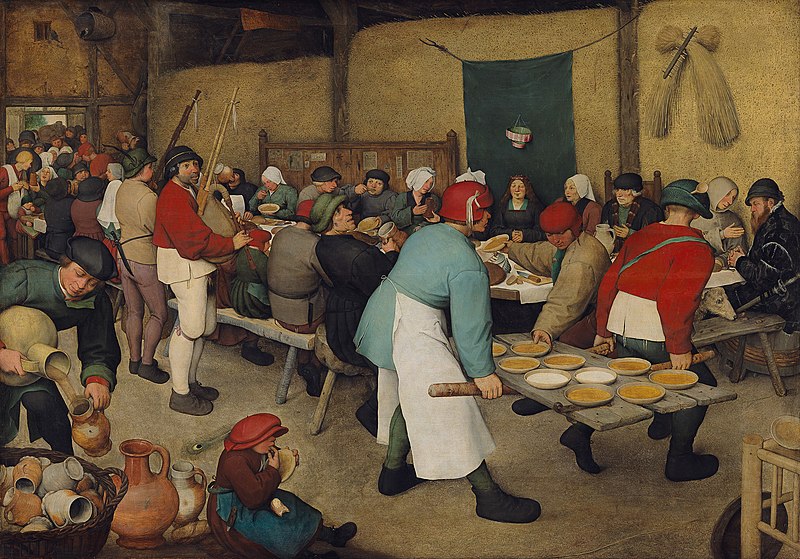 Mira Nair is a gifted auteur, rich in cinematic vision, the joy of life and natural empathy.  Of these three films I have seen in a row and the above mentioned sequence, the latest is the best, with a special appeal for a North Indian audience. She has captured to near perfection the cultural foibles, absurdities and mores which can no where better come into distillation than the vast canvas of a traditional wedding in a well to do Punjabi family. This being her own milieu, her ear and eye are microcopically attuned. This is a heady blend which reminds me, of all things, of Breughal's earthy and sublime painting of a peasant wedding in 16th century Holland. The rumbustious marathon celebration with much ribaldry presided by the throated voice of Sukhwinder's Punjabi pop (the ultimate spice of the setting) is fittingly and miraculously crowned with a monsoon downpour just as the groom's procession arrives, trooping and tripping (and whooping) into the tarpaulin's in a mood of  abandonment. This is a slice of life! Presciently, Mira Nair shares with Ray the honor as one of two Indian origin directors to win the Golden Lion. One looks forward to more.
Posted by S. M. Rana at 11:11 PM No comments:

Three quarters down the film, I recalled (disappointingly) having seen it before. The movie, set in a different place and time, and so acclaimed, did not move me half as much, its elemental force notwithstanding.

Labels: The Grapes of Wrath

This is a film made during the Stalin era in the USSR. It was a time when the Nazi threat was looming. The film relates to a historic 13th century battle in which invading Germans were defeated under the leadership of Prince Aleksandr, whose name has passed into national legend. The film has the epic style resembling David Lean, in its capture of the historic battle faught on a frozen river. The review linked below is a gem in its own genre. Director: Sergei Eisenstein.

Frank Nugent Review
Posted by S. M. Rana at 1:44 AM No comments: