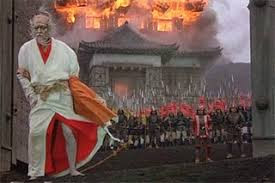 Hidetora, a feudal lord who controls three castles, in his senescence, cedes his castles, Lear like, to his three sons. Two of them prove disloyal, and he is driven to a point, where ie has no option but ritual suicide, which also he fails to perform because of lack of the proper instrument. Crazed, he wanders into a storm with his faithful fool, to be reconciled with his Cordelia like third son, but the gods that be, in their perversion, allow them but a momentary reconciliation before the beloved third son is felled by an arrow.

The problem is that one keeps reading Lear into the movie, whereas it would perhaps be best enjoyed if you don't know the Shakespeare play. This is a film of great visual splendor. We have armies clashing, horses neighing, castles burning, concubines in mutual suicide, and vistas of Japan's traditional architecture and mountainous terrain, all in the glare of bright sunshine (or the light cast by houses on fire) and the blue dome of the sky. Kurosawa is a master of battlefield choreography and the pennants of the rival armies as they flutter (Japan seems to e a windy place) give the battles a ceremonial and carnival liveliness. Particularly poetic is the repeated symbolism of cloud formations in changing moods, which mark the dramatic turning points. Light is one thing the movie is not short of.

The most impressive acting performance, and perhaps the films high point, is Mieko Harada as the demoniacal Lady Sue. Her controlled yet explosive performance embodies her deep and single minded hunger for revenge for the destruction of her own clan and family. Hidetora's transformation into insanity is well depicted by his incomprehension as the world he has constructed over a lifetime goes up in a tower of flames.

The film is a shrine which had to be visited, and it does add something to the pantheon of Lear depictions, but the drama still remains something of a mystery. I have the Soviet and Ian McLellan's versions on queue, and if the gods allow, there is always the wine of the play itself to savor again.
Posted by S. M. Rana at 8:40 AM

Because of certain.....eccentricities...I have literally kept a list of every film that I have ever watched. The last time that I counted...I had seen over 2,500 films. Of all of those films, "Ran" is easily in my top 5.

I agree that the drama may seem odd at times...but I think that it accentuates the story. Things aren't supposed to really make sense. It's an era of upheaval, of son versus father, of great wars and senseless deaths. It is an era of unbalance...it is literally an era of "ran" which is Japanese for "chaos."

Hard to disagree. Lear, on which Ran is based, is among the deepest of Shakespeare's plays since it probes deep into the human condition, particularly the so termed "absence of god". I understand our director, in his seventies when he made Ran, was negotiating a particularly rough patch. I believe he recovered his optimism and zest, particularly in the penultimate Dreams and Madadayo (Not Yet), his swan song.

I'm watching the 2008 Lear from the Royal Shakespeare Company. Well, Ran is a fine movie, but it's not King Lear.

Is it sacrilege to say that I loved this movie more than Sir Ian McKellan's excellent version of King Lear? Of all of Shakespeare's plays, this one perhaps lends itself best to a Japanese re-imagining.

As for how great this film is, I'm not sure if it would make my top five, but it easily makes my top five Kurosawa films, and if one ignores lists altogether, this is one of the greatest films I've ever seen.

Hardly sacrilegious! Comparisons are often unsustainable since we may be dealing with non commensurate objects, eg, fish and fruit, which is superior? Kurosawa is not Shakespeare, nor vice versa. The images from the film are more sharply imprinted even as McKellan's Lear has faded and started merging with the other too excellent RSC productions I saw.