A Performance of Macbeth 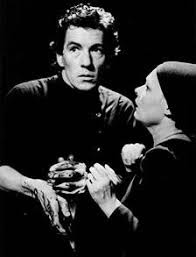 This is purest drama enhanced by the camera's ability to telescope the human face as it intimately eavesdrops on  it's changing expressions, mirroring the turmoil of the inner landscape. All superfluities are dispensed: the murder , the field of battle, the forest on the move. The focus of the direction is on what goes on in the mind. The leading pair have given unforgettable performances taking one as close to the heart of the drama as one's own ability to empathize with life at such an extremity. This beats any other Shakespeare performance on the cinema screen. The darkness of the screen is broken only by the faces and figures of the players and the camera revolves and leaps to scrutinize the faces and the expressions they wear as they melt, ripple or freeze. The faces seem like lamps. It makes you think of Bergman, but the bard's scalding intensity and breadth can hardly be scaled by mere mortals. A youthful McKellan gives a mouth frothing crazed version of Macbeth where one might tend to imagine a middle aged, calculating and philosophical person. Judi Dench has a matronly stoutness and the emotional range to take us through the shades of the metamorphosing anti-heroine. She was made for this role.

Once again, this (the play) is a pinnacle of art that leaves one struck with amazement that such could ever have been written by a human being. This is language like lava: thick, turgid, sulphurous. It is the kind of literature one can imagine to have been born only in a vision or a dream. Shakespeare takes the part of a murderous couple and shows us the human beings dwelling therein. In fact, the drama could not have power or be comprehensible if we did not partake of their natures. Trevor Nunn and his troupe take us one step closer to this unique self image of humankind. Perhaps this is the greatest of the plays.
Posted by S. M. Rana at 4:25 PM