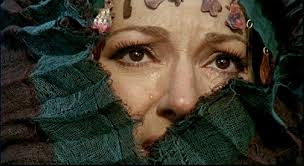 This is good enough as an introduction to Greek drama, conveying it's primeval spirit and power in a nutshell. It's savagery leaves Macbeth many paces lagging. One can guess that the period of Greek civilization depicted was barbaric compared to modern or Elizabethan times. Pasolini was a precocious multi faceted artist, murdered for his communist leanings. He was an unbeliever who longed to believe. He won the Silver Lion at Venice for his ardently poetical interpretation of The Gospel According to Matthew, in which Christ is portrayed in strictly human dimensions.

Medea, a barbarian Princess, elopes with Jason, chopping her brother and strewing his limbs to stall her father and his men, who are pursuing. She is later abandoned by Jason for one of his own kingdom. She wrecks a bloody revenge, destroying his family, including her own children by him.

The movie has a hypnotic quality attesting to the passion of the film maker. The score is a monotonous drone of a chant which waxes and wanes like a chorus. The first half of the film has an anthropological flavor and transports us to a semi savage period. The film starts off with a gory human sacrifice performed in the full glare of the community to propitiate the forces which determine the harvest. From there the movie takes on the plot of Euripides play more or less.

This is a magnificent and powerful film and one can hardly imagine anyone but Callas to do justice to the intense opera like quality of the Greek drama.

I've had mixed feelings towards the work of Pier Paolo Pasolini. "Mamma Roma" bored me and "Salo"...well...the less said about "Salo" the better. Although his "The Gospel According to St. Matthew" is one of my favorite religious-themed films ever.

I guess it's time to give him another shot...

@ Nathanael
This one certainly has that hypnotic quality, as does Edipo Re, which I'm seeing. The only other I know is Matthew, which I liked and may see again. Salo I too have deliberately avoided. In these three movies, he maintains a certain exaltation of feeling.