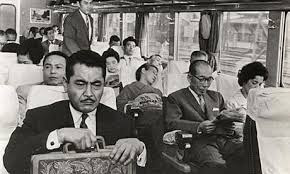 The wrong child is kidnapped. As long as businessman Gondo (Toshiro Mifune) thought it was his own, he was all too ready to shell out the enormous thirty million yen ransom demand. But the next moment it becomes clear that it is not his but the chauffeur's son who has been abducted, and now he somersaults and refuses to pay, all the more because his financial situation (a bit complicated to explain) is such that he is likely to be driven roofless if he pays. Through the importunity of the chauffeur, the persuasiveness of his own wife, and his own inner awakening, he finally decides to pay the ransom at the cost of impending ruin. The child is recovered. The movie now turns into a thriller of police investigations.

What makes the movie interesting is the motive. The culprit turns out to be not one of the business rivals, as expected, but a demented unknown person. A poor man, he has a sickening jealousy of the well to do, and with devilish cunning he plans and works out his revenge. Marx was perhaps not mistaken in thinking that the material divide is the most elemental in all societies.

The film is plodding by Kurosawa standards and for the most is a fairly routine detective story, and the suspense is enough to keep you attached to the seat for two and a half hours. The cinematography is a salvaging feature and we see the sights and sounds of the faded world of post war Japan--the harbors, the crowds, the alleys, the undulating terrain and the sea at Yokohama, all captured in a wistful nostalgic black and white. Mifune delivers as always, with his cobra like intensity, a Kinsky without the kinks.

This belongs to the dwindling genre of wholesome, uplifting entertainment.
Posted by S. M. Rana at 2:56 PM

I have not watched it yet, but I am looking forward to watch Criterion Blu-ray that will be released in July.

Well it's worth waiting for Blue Ray when it comes to Kurosawa in his cinematographic prime!

This is my favourite Kurosawa film. I must have watched it a few times already and it doesn't bore. As you say, the mostly black-and-white, and momentarily pink cinematography is excellent. So are the characters, especially, the main policeman/detective played by Tatsuya Nakadai. I should watch it again :)

Why, what a surprise, Vivek! I have to thank you for introducing me to Adoor Gopalakrishnan, though I've seen only three of his. Hope you are are doing centuries and hat tricks.

Well, we seem to be having some common chord of cinematic response. I too enjoyed the poetic camera in this film and the old world Asian charm, though the word "pink" is typical of your acute perception.