What's love got to do with it 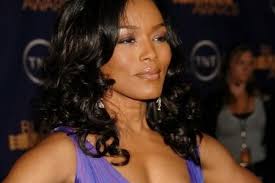 This is the story of the prodigious singer and her experience of physical abuse at the hands of her husband. It is a story of a courageous battle and victory over adversity. It features her most famous songs in her own voice which is responsible for the power of the film. Basset's portrayal really gets inside the skin of the character. It is a portrayal of the soul, spirit and culture of Black America, which the singer as well as the actress seem to embody so well. It is a film not only about the life of a legendary artist, but also encases her art. The music has it's roots in the Afro-American soil, but also expresses with deep pathos universal human emotions of sadness, joy and defiance. The titular song is expressive of a kind of maturity of emotion transcending superfluity.
Posted by S. M. Rana at 1:37 AM No comments:

Labels: What's love got to do with it

Othello is played for the first time by an Afro American and Iago by Branagh. I think Ian McKellan's version is the best I have seen. Branagh fails to deliver the grandeur of distilled evil which is Iago's essence. Laurence Fishburn's adds little to the Q of Othellos except his color--Shakespeare never wrote to be underplayed or without gusto. But this is an adequate and enjoyable re-reading of the text if lacking in much brilliance or innovation or interpretation of it's own, an old wine in the same bottle.
Posted by S. M. Rana at 9:18 PM No comments: 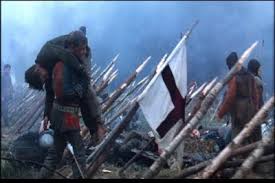 This is much closer to the original play than the  forties Olivier version which was moulded into a jingoist piece of wartime propoganda, cutting out several central incidents. The Henry here is more fleshed out, human in his failings, and complex as a character. It is interesting as a study in leadership. The war scenes, for all the gushing streams of blood and swathes of gore, are tiresome because one has seen them so often. They resemble a cricket match from a present day perspective, particularly since wars seem to have been framed with so many nice rules.Branagh as the king is loud even though the role demands it. This is a very adequate introduction to the play.
Posted by S. M. Rana at 6:24 PM No comments:

The enormity of the holocausts that have taken place within living memory raise fresh questions about existence of any order of justice in the world. What kind of God could have let this happen? The present film is set in Auschwitz and the prisoners in the camp many of whom await the chambers on the next day set up a kangaroo court to put God on trial, specifically to examine whether he his been true to his Biblical covenant with the Jewish people to take care of them. The drama is neither able to project the gravity of the questions about theology which twentieth century experience raises, far less to make out a case for faith in spite of them. The film is set in the unlighted interior of a dormitory and haggard victims harangue around a stool, mostly expressive of anger about the grief they have passed through. It's a depressing film unilluminated by passion. This drab, verbose, lack lustre drama does not rise above quibbling over the text of the Jewish scripture, failing even to bring the great enigma into focus, leave aside its resolution.
Posted by S. M. Rana at 6:48 PM No comments: 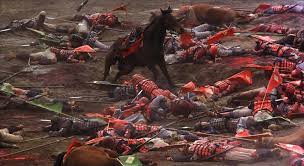 The intent of the film is to depict sixteenth century warlike Japan framed in an exciting, colorful, humorous, racy plot. A convict about to be executed is found to have an impossible resemblance to the warlord and is spared for his possible utility as a double. As it happens, the lord dies in battle and in deference to his wish to have his death kept secret for three years, the ex convict has a full time and difficult job of impersonating the lord. He gradually learns to deceive even the concubines and grandson. We have a panoramic depiction of the era, including the codes of honor and war. Firepower is an integral element of weaponry and we see the glimmerings of European influence. This is historical film making of a high order.
Posted by S. M. Rana at 9:40 PM No comments: