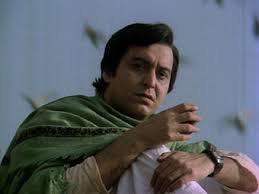 Here is a whodunit filmed in the ambience of Kashi, with the Ganges rippling and the music of boatmen. A jewel encrusted Ganesh idol is stolen and Soumitra Chatterjee playing detective Feluda is summoned for the investigation. The chase takes us around the wending lanes of the world's oldest city with a delightful score keeping joyous pace with the camera. It is Ray reveling in the streets and smells he passionately loves. The sadhus, bhajans, posters for saree ads, ancient havelis, weathered walls, take us back to our childhood which has not quite disappeared. The film is soaked with nostalgia. The plot meanders languorously picking up momentum half way and has a typically perfect Ray-film ending-suspenseful, funny and deeply sentimental. Ray is a true artist who loves everything and his camera is able to convey that joy of just being alive.
Posted by S. M. Rana at 5:22 PM No comments:

As my first viewing of a full fledged Opera, this is eye opening, though unlikely to be the first of many. One may miss the plot as well as the language of the play, but this adds a different dimension by rendering the turbulence and pathos into the language of voice and orchestra, a language simpler and more piercing than even poetry. Both the leads are rendered with regality, like lightening answering to thunder. Iago's evil is delivered is wryful, even with a comic touch.
Posted by S. M. Rana at 5:52 PM No comments:

The philosopher's stone is supposed to turn iron into gold. The movie is a mature children's story, a comedy, a farcical fantasy with moral overtones. It's certainly atypical, and the master's hand is barely recognizable although it dates within the trilogy period. The discovery of the stone turn's the world of a bank clerk on the verge of being fired upside down. But he is smart enough to realize the perils latent in the blessing. A miss-able film, unless it is for Ray's sake.
Posted by S. M. Rana at 2:32 AM No comments: 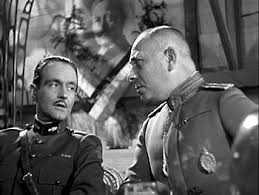 This is the best of the three Renoir films I've seen. The River, set in India, is the worst, at least from the POV of Indian sensibility (reviewed somewhere on this blog). Grand Illusion is acclaimed as a masterpiece. I certainly found it enjoyable, choked with the tragic ironies and absurdities of war, a strange film. It is out and out anti war and is a compound of satire, humanism, and acute observation, with a stretch of caricature. Set in WW1, it was released just before WW2. No wonder it was suppressed by the authorities, so powerful and heartfelt is the anti war message. War is an unnatural manufactured thing and the differences, here between the French and Germans, have to be pumped up. The average soldier as well as officers have a hard time sustaining the hatred, almost a duty. It is full of social observation, the sense of fraternity between the French and German officers as a social stratum, reminiscent of the mutual recognition between the officers of India and Pakistan, both trained in the British military ethos, during the Bangladesh war. Finally we have the heart rending POV of a German woman who has lost all her kin in the war and who offers shelter to two escaped French POWs. This is truly a perfect film and could hardly have been digestible to the officialdom. Erich von Stroheim as the aristocratic German commandant of the POW camp gives an unforgettable performance.

What indeed is the Illusion? The Enemy. The hatred against people on the other side is a feeling that has to be systematically worked up in an organized fashion to the point of hysteria. What greater sin is there in wartime than not to hate the guys on the other side of the fence?
Posted by S. M. Rana at 10:46 PM No comments:

Matinee idol Arindam (Uttam Kumar) is travelling from Calcutta to Delhi by train to receive an award. His life and personality is revealed in a series of encounters, dreams and flashbacks. The swift moving train is a metaphor for the passage of time in an event crowded life and the film concludes with the train's arrival at the destination. We meet a series of exquisitely etched characters representing the social pageant, lensed with love, humor and refinement. Sharmila Tagore is a journalist not particularly keen to encounter him but, as things turn out, is drawn into a close interaction. The dreams probe the morbidity of the subconscious, depicting drowning, death, betrayal, desire and decay. The world of the stage and cinema is brilliantly surveyed with great realism and of course the knowledge and involvement one would expect. The world of a celebrity with it's intoxication , power and loneliness is shared with us. There are tinges of Sunset Boulevard and the dreams have the flavor of both Bergman and old Bollywood.

Having seen most of Ray's films, this is easily one of the best. It has the delicacy and lightness of touch that is Ray's distinction and moves as relentlessly as the train, hardly pausing for breath till it's heart warming finale. This is great cinema. He is arguably the most humanistic among great film makers.
Posted by S. M. Rana at 12:56 AM No comments:

A Woman Under the Influence

A family is a machine in which the family members like machine parts inter-mesh to produce effects between themselves and outwards. Variegation is the rule with families as with individuals. Tolstoi famously said that unhappy families are all unique. Dysfunctionality has a million hues and we are presented with a meticulously etched specimen.

This film is about a family in which the two parents are severely disturbed even as they struggle with enormous effort to take care of their three children and each other. Love for the children is what spells their salvation from doom and despair. Somewhere down the story, the wife has to be committed for some time, but the tragi-comedy resumes on her return.  That they inhabit a brink of disaster becomes evident when the lady is upset enough to to try to do something to herself with a knife which is grappled loose resulting only in a bloody hand. It is as though they have a different sort of time, watchful and dangerous, where the inner house of cards has to be propped continuously to keep real peril at bay. The film ends on an uplifting note as it bypasses the possibility of tragedy. If there is a lesson, life itself is ultimate, and it is significant that the film affixes no demeaning labels.
Posted by S. M. Rana at 5:45 PM 2 comments:

Labels: A Woman Under the Influence

Elektra is the daughter of Agamemnon, the returning hero of the Trojan war, who is murdered by her mother and her lover. Her brother Orestes escapes with his life but Elektra is imprisoned and later on married off to a peasant. The powerful plot is about the revenge exacted by the siblings, particularly the slaying of their mother. There is a chorus and the main actors strike statuesque poses and declaim their words. For all the stilted acting, the film does manage to hold your attention, extracting the last ounce of emotion out of each twist of the story. The black and white photography of the bare undulating countryside is one of the attractions of the film. A relatively painless introduction to Greek drama, all the more since all the poetry has been nearly shorn to leave us a virtually silent film or a mime performance.
Posted by S. M. Rana at 1:34 AM No comments: