The film's claim to attention was it's mention by Pauline Kael as her favorite film. At well under an hour, and easy availability in an excellent print on YouTube, it seemed worth a try, in spite of being silent. Most memorable is the haunting, misty, autumnal black and white cinematography. The title refers to a suburb of Paris and the film is as much an exploration of the place as an essay on human experience framed exquisitely by these run down environs as they must have been in those twenties. It is a modernistic montage of cobbled streets, aging weathered working class dwellings, flowing water and bridges, trains and machinery, old and new.

The film opens with a curtain swelling to unfold a scene of grisly brutality followed by the murder of a couple. This is followed by the travails of the two daughters as they grow up, get involved with the same man, experience jealousy, the birth of a child, learning the meaning of hunger, suicide contemplated, and a violent climax. The plot is not explicit but the forty minutes concentrate a lot. The rapid fire rush of images weaves a film of stunning power and artistry. Though diametrically opposite in flavor and content, its lyricism reminds one of that more acclaimed masterpiece, 8 1/2.

Silent cinema is no poor cousin. Unpropped by technology and sound, it must be sustained by its own inner resources.

The film in five parts and excellent print and sound can be viewed HERE on You Tube .
Posted by S. M. Rana at 1:11 PM 2 comments: 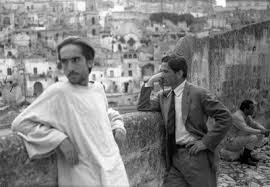 The most widely accepted accounts of the life and teachings of Jesus are the four Gospels, which are included in the New Testament. The life of Jesus is told here following closely the version of Matthew, the first of these four. Pasolini was a professed atheist and Marxist, but it would appear that his artistic vein is deeper than his skin deep ideology. He is a strident humanist and belongs to that season when Marxism was often synonymous with sympathy for the downtrodden and inarticulate.

The visual beauty of the film lies in the ramshackle villages from another century sprawled on the mountainside, with ragged urchins and tattered peasants crowding the narrow labyrinthine lanes. A smug and voluble Christ is played by a university student who looks like one. There is little of dialog or script and the movie is virtually a reading of the text of the Gospel, with a rather noisy and jarring musical score which keeps alternating between Bach and Negro spirituals. What does come through with some force is the conviction of the message, whose revolutionary aspect is mainly in the divine identity of it's deliverer. The ethical content is probably not drastically different from the values which may have prevailed more in conspicuous neglect than observance.

The divinity of Jesus is not stressed and the miracles are just stated in a matter of fact way by way of textual faithfulness. This may be as things may have actually looked like, the extra ordinariness lying in the inner fire that must have blazed inside him.

The film is helpful as an introduction or a revision exercise in the essence of the Christian outlook and teachings. The final feeling is of a rather bleak and dreary other worldly outlook. The film drags on a bit too long to its depressing conclusion. Guilt and sinfulness are not pleasant baggage.
Posted by S. M. Rana at 12:24 AM No comments: