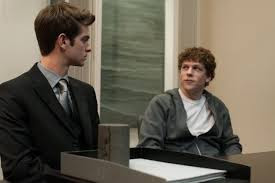 David Fincher, 2010,
This is a riveting snapshot (slightly long at two hours)) of the brave new world of the internet and the way it makes the distant close and the close distant. The script sizzles and sparks and the inter-cutting (fragments of two legal hearings punctuate the narrative) relentlessly drives the plot forward in an mind stimulating roller-coaster which keeps the viewer on his/her toes.

The film narrates the story of the $25 billion worth Facebook website, started in 2003, and it's creator, Mark Zuckerberg, a Harvard dropout and the world's youngest billionaire.

Zuckerberg is bursting with intellect and motivation with a mind like a furious engine and la dolce Harvard is the right environment to breed prodigies into dizzy success stories. (Zuck doesn't talk quite that frenzied on youtube but it's the film character we have to deal with, accuracy not being a factor.) His speech is a precise staccato articulation of his brisk and unconfused mental processes. He is obviously untroubled by philosophical problems of any kind, surfing on the wave of his effortless intoxicated ascent, only slightly put down by social inadequacy. The character is quite credible and we see a guy with a focussed tunnel vision, internally propelled like a "heat seeking missile" (Ebert) . He sees clearly and correctly that nobody around him is a match for him in the areas where he excels. He is a young, level headed, forthright person, too intelligent to need to stoop to deviousness. We see a certain transformation in the latter third as he is assaulted by hostile forces that work hard to knock him off balance.

This is a convincing portrait of a specialized genius and the other characters mainly serve to frame the central character. It's interest lies in being the "movie of the moment" with new technologies and the changing face of business. At yet another level, it is an excellent portrait of goal oriented behavior, as contrasted to our majority of dithering lives,

I clicked on the name link for your blog at Ebert’s thread on loneliness. Almost a year ago he did a post on me and my website. Once or twice a week I check out his threads.

PS- I've seen your name on many Ebert threads, incl. the one he did on me.

--
The Dan Schneider Interviews: The Most Widely Read Interview Series in Internet History
--
Roger Ebert calls Dan Schneider, 'observant, smart, and makes every effort to be fair,' and states,
'What is remarkable about these many words is that Schneider keeps an open mind,
approaches each film afresh, and doesn't always repeat the same judgments.
An ideal critic tries to start over again with every review.'
--
Member of the Internet Film Critic Society (IFCS)
Criterion Collection and Classic DVD Examiner
www.examiner.com/x-19688-Criterion-Collection-and-Classic-DVD-Examiner
--
www.Cosmoetica.com
Cosmoetica: The Best In Poetica
www.Cosmoetica.com/Cinemension.htm
Cinemension: Film's Extra Dimension

You might call that an offer "hard to refuse". After that blog about you by Mr.Ebert, I read and enjoyed many of your reviews about great movies, and was struck by the independence of judgement, and commented on some of them. Thanks for stopping by.