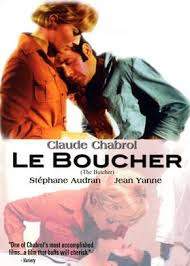 Popaul is a butcher and runs a meat shop. He is young and handsome and has an easy gait of one accustomed to swinging his arm. He is good natured and simple and well liked in the village community. He has done fifteen years of military service in Algeria and Indo-China where he was assigned the butcher's job in his units. He has seen more than enough of killing and corpses and blood.

He meets Helene, the young and beautiful headmistress of the village school, at a wedding celebration, and a friendship is struck. This wedding feast serves as a prelude to the story and we get to know the community by participating in this intimate celebration. Helene is not inclined to romance and the friendship proceeds along platonic lines. The butcher sometimes brings along a choice cut of meat for her. She presents him with a cigarette lighter, which is to play a significant role in the plot like Othello's handkerchief. He often visits her during school hours and lends a hand with the kids and evenings for a drink in her apartment on top of the school. He is strongly attracted to her but she wants to hold on to her celibacy chosen after the trauma of being ditched by her guy ten years ago.

And then a young woman is found murdered in the surrounding woods, which naturally causes ripples in the peaceful community. But the first half of the film is a relaxed savoring of the aromas and flavors of this French hamlet with its steeples and woods. There are also the prehistoric grottoes with otherworldly streams and formations of stalactites, with the art work of Cro Magnon Man on the walls. Helen is a popular and loved teacher and finds much satisfaction in caring for her herd.

It is during a picnic which proceeds through the ancient caves and out into the hillside with sunshine pouring from the azure sky that the second murder is detected when a few raindrops of blood fall on a piece of chocolate in the hand of a child. A bleeding hand is protruding over a ledge above. The needle of suspicion hovers towards Popaul.

The movie now turns into pounding suspense drama reminiscent of Psycho and Wait Until Dark.

It seems that the violence and suspense is only a MacGuffin to support this lyrical movie about people living in the lap of this bounteous region, with the camera lazily dwelling on each detail. The violence is only hinted and what we get is an exquisite and delicate liqueur of visual delights well supported by a quiet and delicate score. This is a film to roll over the taste buds and to allow the taste to linger.
Posted by S. M. Rana at 4:59 PM

You know...one of these days I'm going to have to watch more films by Chabrol. This is the only film by him that I have seen.

After that terrifying climax sequence,the final scene lingered on my mind. This movie is always fascinating to me.

SC: This movie was more about mood and atmosphere I felt. The aroma of vineyards along with the metaphorical force of the profession of butchery combines to create an unusual brew of suspense.