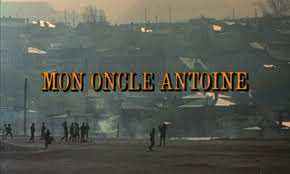 This is sometimes praised as the greatest Canadian film. All I can say is that it is perhaps so local in it's meanings and evocations, that it's nuances and impact are lost on others from warmer climes, as they are for the most part on me. Many a time I was inclined to give it up as a lost quest but somehow hitting the half way mark, I just as well decided to do the rest.

The film is set in the 1940s in French speaking province of Quebec in an asbestos mining area, where the mineral noxious to human health takes it's toll on the labor community. We see the life of a family in a desolate hamlet through the eyes of a pubescent orphan. There are many human touches but the whole just does not seem to add up, at least not for me. It gathers momentum towards the end as we are taken on a journey through a snowstorm in the terrifying bleak Canadian snowy desert of ice on a coffin bearing horse carriage in the company of sozzled Uncle Antoine and his nephew Benoit, who is the protagonist. The situation is ludicrous, terrifying and pathetic in the sheer helplessness of the human midgets trapped in this icy hell.

The film does convey an image of the vast sparsely populated volumes of Canada and the struggle of settlers in former times.