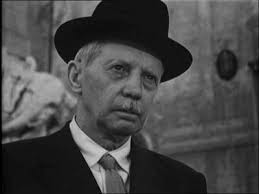 Umberto is a government pensioner on the point of eviction from his apartment, where he lives alone with his small dog Flike. He does not have the 15000 lire owed in rent arrears and the landlady, for reasons of her own, wants him out. He tries to raise money by every possible means at one time even getting himself admitted to a hospital on some pretext. But nothing is working out and we see him driven step by step to a pitch of desperation and sadness. He cannot bring himself to beg on a street corner (he was a respectable official all his life). Finally we see him gazing with a kind of longing at a train rushing by. But what will become of Flike?

This is a perfect piece of humanistic cinema about the sadness and loneliness which can be a part of old age. More than that, it is about the pain of living. Vittorio de Sica has captured a life's throttled cry of despair. But it's not all bleakness. It has humor, courage, defiance, defeat and a rising from the ashes. It is a picture of "life" through eyes of compassion. Nor is it about old age alone. Somewhere the artist has touched what one may call universal life. The youthful pregnant maid who does not know which of her two lovers is the father now faces an uncertain future, no less than Umberto. And the yelping puppy who itself has had some perilous brushes with disaster is no less an expression of existence. Everything melds. The black and white camera work, the mournful score and the pitch perfect acting make this a great movie to watch.
Posted by S. M. Rana at 12:34 AM

This was my first Italian Neo-realist film. It broke my heart. I have YET to see a Neo-Realist film to beat it.

I can unreservedly agree with you about this one !!